Edwin “Jiggs” Fauver began his White House career in 1942 as a telegraph operator during the Franklin Roosevelt presidency. He retired in 1972 while Richard Nixon was president. In between, he served as White House Transportation Officer to six U.S. Presidents and their staff. Mr. Fauver’s White House Memorabilia was purchased from his estate by an anonymous donor and donated to the LBJ Museum of San Marcos.

These items will be on special display at a date in the near future. 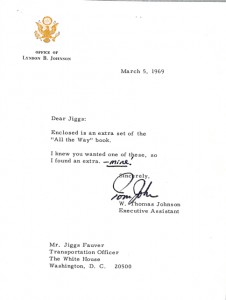