SAN MARCOS – The special opening of an exhibit entitled “LBJ Country: Through the Camera Lens of Norman Dietel” scheduled for 1 p.m. Saturday, Nov. 28, 2009 at the Lyndon B. Johnson Museum of San Marcos will also provide an opportunity to say good by to departing museum director Scott Jordan.

The exhibit contains panels of mounted photographs taken by the late Norman J. Dietel who was the son of the founder and himself the long-time editor and publisher of the Fredericksburg Radio Post newspaper. An old time newspaperman and photographer, Dietel became friends with Lyndon Johnson in the course of his meticulous coverage of the Texas Hill Country while Johnson was a senator.

The prints on display are from a collection of some 1,200 photographs and negatives donated to the LBJ Museum of San Marcos by one of Dietel’s daughters, Rosemarie “Pixie” Dietel Hageman of San Marcos. The exhibit was assembled by Jordan as a parting gift to the area.

Jordan, who was hired as the museum’s first director in April of 2007 shortly after the downtown San Marcos museum opened its doors on Dec. 6, 2006, has accepted a position with the Texas Heritage Trails program in the West Texas town of Sonora. Nov. 28 will be his last day to work at the LBJ Museum.

Jordan took a special interest in the historical photos included in the Dietel collection. The exhibit consists of twelve panels that will be mounted in the museum’s main gallery. They reflect a range of LBJ related subject matter – from the President’s entertainment at the Texas Whitehouse of such distinguished guests as Conrad Adenauer and Van Cleburne to scenes in Stonewall and Fredericksburg churches.

The massive photo collection has been converted to digital format, thanks to the Portal to Texas History program at the University of North Texas. Funded by the Summerlee Foundation, the program helps small museums and entities like the LBJ Museum of San Marcos preserve archival materials. The photographs and negatives were scanned and put on disc for the museum.

Norman Dietel’s father, William Dietel, was an educator who traveled from school to school around the Hill Country (with one diversion to the South Texas town of Mercedes) during the course of his career as a teacher and school administrator. He had graduated from Southwest Texas State Normal School at the age of 16 and went on to UT-Austin to receive his master’s degree in 1913 at the age of 26.

Rosemarie Hageman said when her grandmother was pregnant with her fifth child, she said “no more” to further travel, so her grandfather decided to work for the local newspaper, the Fredericksburg Standard.

Norman Dietel, born in New Braunfels in 1912, inherited his father’s love for the newspaper business. He and his siblings were all incorporated into the family business. When he was 30 years old, Norman married Fredericksburg native Louise Mae Henke, a relative of the late Admiral Chester Nimitz, in 1939. The couple had three children – Kathleen Dietel, William Randolph “Randy” Dietel and Rosemarie Hageman. Rosemarie is the youngest.

Hageman said her Aunt Erna Lee wrote and edited the paper’s society pages. Her uncle Freddie Dietel did a lot of the typesetting. Her grandmother, Alma Holecamp Dietel, also had an integral role in the family business, running the front office and proof reading copy. She worked well into her 80s and would walk the two miles from her home to the newspaper office if her son did not pick her up.

The collection reflects Norman Dietel’s love for photography. His daughter says he took pictures of everything from lightening to fires on a daily basis. And she says, “He never met a stranger.”

“My father was a visionary,” she says, adding that he took his role of community service quite seriously. He would eventually be secretary of the President’s Ranch Trail organization and was involved with the Historical Society of Fredericksburg. In addition to taking photographs, Norman Dietel wrote editorials and a weekly range and field column and introduced to the community a long-running summer vacation guide. He also acquired the Harper Herald, which he published from 1938 to 1987.
Quite an entrepreneur, he ran the local Western Union office for 27 years and was the local national weather observer for almost 50 years. He was instrumental in helping establish and promote many civic endeavors in the Fredericksburg area, including establishing Enchanted Rock as a state park, setting up the Nimitz Museum, designating Ranch Road 1 as the President’s Ranch Trail. He was also instrumental in attracting Conrad Adenauer to visit Fredericksburg. He was a two-term director of the Fredericksburg Chamber of Commerce and founder and chairman of the Eastern Hill Country Resource Conservation and Development Agency.

Norman Dietel enjoyed a close relationship with Lyndon Johnson over the years. He offered the rising politician advice and asked his help with such things as obtaining military records of his brother William Dietel Jr.’s ill fated B-17 airplane, named the “Sky Queen,” that went down over Holland during World War II.
In her interview for the Texas State University-San Marcos LBJ Museum of San Marcos’s collaborative oral history project, Hageman said of her father, “My dad was a very interesting man, and he was a big supporter of LBJ. He believed that the only way the people in office could know the needs of the people in their community was if they communicated with him. And so he just wrote on his little typewriter, clicking away – I can still hear him – many interesting letters about the weather and anything else that he felt a senator needed to know about his community.”
Hageman says her brother Randy said their dad used to say, “I’ve kept six honest men serving in my newspaper career. They were ‘who, what, where, when, why and how’.” He also said their father always had the community of Fredericksburg at heart, always looked to the future and was not above taking a little risk.

The LBJ Museum of San Marcos fills a special niche in the Johnson legacy by celebrating not only the President’s days in San Marcos while attending what is now Texas State University-San Marcos but also his days as a public school teacher in Cotulla. It has a unique perspective to share with the public about the man known as “The Education President.” Texas State is the only university in Texas – public or private – to have graduated a U.S. President.

Except for a few holidays, the museum is open from 10 a.m. to 5 p.m. each Thursday, Friday and Saturday. Special tours can be arranged on other days by contacting the museum at 512-353-3300. 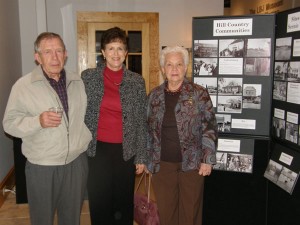