The public is invited to the free reception and lecture this Thursday, March 5th @6:30 pm

Lyndon Johnson’s War on Poverty: 50+ Years Later
Dr. David Zarefsky, a noted scholar in presidential rhetoric, will give the Spring Lecture on “President Johnson’s War on Poverty: The View from 50+ Years Later” on Thursday, March 5 at 6:30 p.m. at the Lyndon Baines Johnson Museum of San Marcos, 131 N. Guadalupe Street, San Marcos.The public is invited to attend the free event. A reception will be held at 6:30 p.m., followed by Dr. Zarefsky’s talk about the impact and current status of some of President Johnson’s signature pieces of legislation. The lecture is sponsored by the LBJ Museum of San Marcos, The Department of Communications Studies, the Political Science Department, and the Public History Program at Texas State University. Additional sponsors include Palmer’s Restaurant, HEB and Embassy Suites. Professor Emeritus at Northwestern University in Evanston, Ill., Dr. Zarefsky is the author, co-author, or editor of nine books and the author of over 100 articles in books and professional journals.

“A Legacy of Service” of the late President George H.W. Bush will be the subject of the annual Spring Lecture at the Lyndon Baines Johnson Museum of San Marcos on Thursday, March 7 at 6 p.m. The public is invited to attend the free event. Warren Finch, Director of the Bush Presidential Library at Texas A&M University in College Station, will talk about the 41st president’s contributions during his long life. President Bush died at the age of 94 on Nov. 30, 2018, the longest lived president in U.S. history. He was buried next to his wife Barbara and daughter Robin near his presidential library in College Station. Texas A&M also houses the Bush School of Government and Public Service, a graduate public policy program. The LBJ Museum’s spring lecture will begin at 6 p.m. at the museum, 131 N. Guadalupe Street, San Marcos, with a reception honoring past museum board members. Mr. Finch will speak at 7p.m.

The Lyndon Baines Johnson Museum of San Marcos will host a special edition of its annual Fall Lecture on Oct.24 with a debate on voting rights by the LBJ Debate Society of Texas State University. 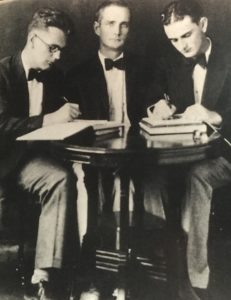 Following the debate, the museum will show a short film of President Johnson signing the Voting Rights Act.

Founded in 1903 as the Chautauqua Literary Society, the LBJ Debate Society is one of the oldest student organizations on the Texas State campus and competes regionally, nationally, and internationally in a variety of debate formats.

The team is a perennial champion in the Texas Intercollegiate Forensics Association’s championship tournaments. In the spring of 2018, the society won the Pi Kappa Delta Division One National Championship.

President Johnson was a star debater when he attended Southwest Texas Teachers College – now Texas State University – from 1927-1930. The Lyndon Baines Johnson Museum of San Marcos is the only Johnson site in Texas dedicated to his university student years, including the time he spent teaching in Cotulla, Texas.

The museum is open to the public Thursday – Saturday from 10 a.m. to 5 p.m. Group tours may be arranged by calling the LBJ Museum at (512) 353-3300. Museum facilities, including the second-floor auditorium and a conference room, may be rented by civic, educational and cultural organizations for special events.

The 36th President of the United States

The Lyndon Baines Johnson Museum of San Marcos is dedicated to President Johnson’s formative years and how his early experiences as a college student and schoolteacher impacted the landmark legislation passed during his presidency from 1963-1969. President Johnson spent his college years in San Marcos at Southwest Texas State Teachers College – now Texas State University – from 1927-1930. Here he honed his political skills and developed a strong commitment to civil rights, education and eliminating poverty. President Johnson announced the creation of the Job Corps program on campus in November, 1964 and signed the Higher Education Act at the university in November, 1965. We invite you to visit the Museum to learn more about this great American!